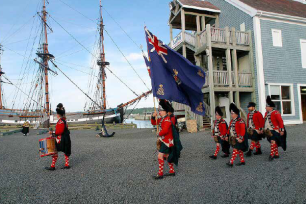 Construction of the replica of the Ship Hector and the Hector Heritage Quay began in 1990 and the Hector was launched in 2000, quickly becoming a popular tourist destination.  The site was owned by the Town of Pictou and received financial assistance from the Hector Foundation.

The Board has embarked upon the monumental task of restoring the Ship Hector to a fully rigged and operational tall ship in time for the 250th anniversary of the landing in 2023.  Government funding, fundraising and community support will make this dream a reality.